The history of
LIAN CHINAHERB 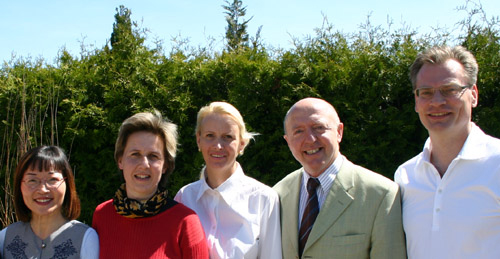 Lack of supply as a trigger

The practitioner Esther Denz and her husband Sixten Kollstad founded Phyto Comm in 1998 because the supply of Chinese medicinal herbs in Switzerland at the time was limited in variety and the quality was unsatisfactory. The goal was to make their contacts with herb suppliers in Taiwan available to friends and colleagues in the profession.

Interest on the part of practitioners was very large from the outset and increased steadily. In particular, Dr. Hans and Amy Boller, founder and owner of the Chinamed centers, who also sought to a find reliable solution, became interested. The expansion of operations pressed on and the planning of a joint stock company began.

In the spring of 2000, Sixten Kollstad and Karin Knauer, a former patient of Esther Denz, who had just joined the founding team, delivered the company’s mission and a rough concept in the form of a business plan. The feasibility was thus established. An agreement was quickly reached for the distribution of shares. It guarantees that the company is managed in accordance with all shareholders and can not be taken over by individual interests. Hans and Amy Boller carefully selected the founding date according to the rules of Chinese numerology: On 8/8/2000, the company LIAN CHINAHERB AG was born - to a certain extent as a "Chinese Sunday child."

The preparations - especially the quality assurance system - took a great deal of time and effort. We had clearly underestimated the requirements. Only six months later, we were able to apply for a permit from the canton, which we received after a thorough audit by the canton pharmacist. The dry spell of sales was much longer than expected. The business activity of the Chinamed centers with their existing customer base made the construction of such a complex and costly quality assurance system possible.

In addition to the development of the current quality assurance system, one other major milestone of our company is, above all, the composition of our staff, which now includes more than 40 people who are passionate and motivated about LIAN.

The daring step across the Swiss border to Holland was made in 2008 with the founding of our subsidiary LIAN CHINAHERB BV. The opening of the European market allows further growth of the company and brings us new challenges through the country-specific characteristics of the different regions.

The change in 2011 to a custom, professional and validated ERP computer system and web-based online ordering system (OOS) was decisive for today's well-functioning internal processes. The TCM Knowledge Database, published at the same time, became a solid part of our customer’s daily work and is expanded daily.

The building of the company was demanding. Nevertheless, from the outset we also committed ourselves at the political level, for example, within the framework of the Swiss Medicines Act. We are also trying to utilise our position and share our know-how in various committees at the EU level. For example, when introducing monographs of Chinese herbs into the European Pharmacopoeia.